skip to main | skip to sidebar

Last one of the "old" videos

This one was the first video I made, filmed on a sunny weekend last autumn.
The plan was to try the new camera and film a problem called Sternenkante.
I had tried it on couple of visits already years ago, but managed to do it first time only a week before the filming.
It is a really nice one. Even with good friction it is a bit tricky, but I thought that I had finally figured out the "tricks". I was wrong. It still took a lot of tries before I finally had it dialed in again. After that I could again do it on every try.
And the grade? well its 6A+ in the guide book :)

Anyways here is the video.

The hard moves are the two first ones, after that its easy.

We also tried to film a traverse on the same block called "In da fingers and dat feet", but I failed to climb it. And as I have not climbed it previously, I did not want to "fake" it for the film either.
But here is a frame grab from the video. 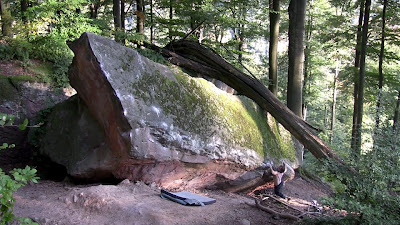 Nice one also. As the block is on a slope it is actually climbing quite clearly upwards instead of traversing directly sideways. Theres also a nice pic of it in my brothers blog.
(no go that time either as it was too wet)

But the new video camera was not the only gadget on test that weekend. I had also a new Bialetti mokka pan. This model is called Brikka and has a weight on top of the nozzle. That way it will build up pressure and the coffee will burst out producing a nice crema. It is even easier to use than a normal Bialetti/mokka pan and very very recommendable. 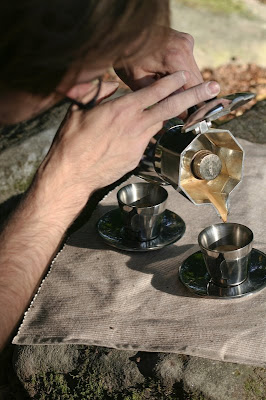 As W. Güllich said: "You don't go for a coffee after climbing, coffee is an integral part of climbing."

Thats it for the "old vimeo stuff". The temps are back above zero here so now I dare to take the video camera again with me, so hopefully I'll get some new stuff done soon. Am also keen to try the effects of added memory and new hard disk on editing...
Lähettänyt jeguri klo 12.44